About Us
News & Reports
By Punit Shah, Manager of Audits

Just because a building was built recently, or has “high-efficiency” equipment, does not mean that the building will actually be energy efficient.  In fact, often high-efficiency equipment and systems need more highly trained engineers, more rigorous maintenance, and more careful tune-ups in order to work their best. It’s kind of like the difference between doing a tune-up on a Prius versus the old stick-shift that your uncle could fix himself. What follows is the story of a decade-old building with some really big energy problems and some relatively simple fixes… once we figured out what was going on!

New York City’s Local Law 87 (LL87) has motivated and, in some cases, obligated building owners and operators to analyze the performance of their energy systems since its inception. However, the benefits of a retro-commissioning study are far greater than simply adhering to a compliance requirement.

If you are unfamiliar, LL87 requires all buildings in New York City that are larger than 50,000 square feet to perform an Energy Audit and Retro-commissioning Study every 10 years. This initiative gives building owners an opportunity to investigate and evaluate their building’s energy performance and address concerns with their major equipment.

As one of the leading LL87 service providers, Bright Power has come across several buildings where this compliance requirement has uncovered major issues with systems operation and overall efficiency. These audits have helped our clients dig deeper into their utility consumption, identify critical areas of concern, and discover opportunities to save energy and water. In many cases, we have uncovered solutions to improve the performance of major systems in the building and to address inefficiencies that would otherwise cost owners thousands of dollars more in utility spend.

We have observed that multifamily buildings with central hot water heating systems often illuminate the vast benefits of retro-commissioning projects. This is largely the case for heating systems that consist of a high-efficiency condensing boiler — and their issues can be compounded when the system includes a cogeneration (cogen) system. While these highly efficient systems are capable of realizing significant energy savings, they can only do so when they are designed, installed, and operated appropriately.

The most significant benefit of condensing boilers is their higher efficiency. This is achieved by recovering the latent heat from the exhaust gases and is predominantly dependent on the temperature of the return water served to the boiler as shown in the figure below. When the return water temperature rises above a certain temperature (120℉ in this instance), the boilers are no longer able to recover the latent heat, thereby losing their efficiency benefits. For this reason, it is imperative to accurately control the operation of these boilers to ensure the lowest return water temperature possible. 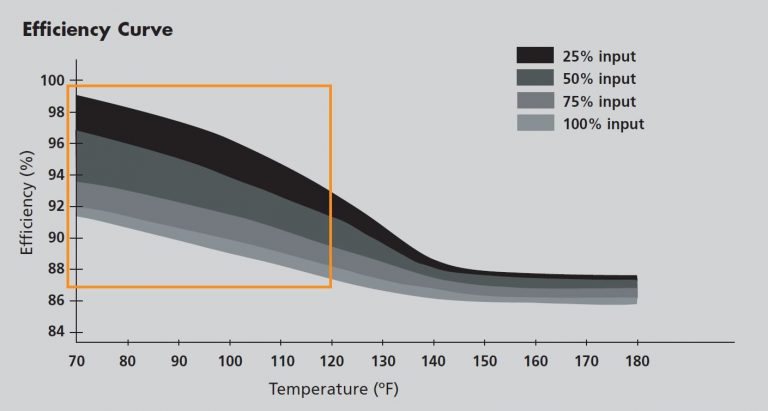 Over the past few years, we have seen issues at over a dozen properties with nearly identical systems and operation parameters. In most cases, the condensing boilers were operating such that they were incapable of taking advantage of higher overall efficiency.  What started as a compliance-driven study in these buildings became much more, delivering real value to the owner and residents.

Here is an example of an LL87 audit we performed on a 10-year-old building where we encountered issues with the operation and efficiency of the heating system. This building is representative of a typical high-efficiency heating system that includes condensing boilers and a cogen unit. On paper, this building should be fairly energy efficient considering the age and equipment. However, that was not the case. It is likely the building owner would not have considered performing an energy audit had it not been mandated by LL87.

We started our analysis by benchmarking energy and water data for the property in our EnergyScoreCards platform. We immediately saw red flags. The first of which was the property’s Energy Use Index (EUI): it was more than double the national average for multifamily buildings. And when compared to buildings in New York City, the EUI was in the bottom 50% among buildings of similar age and occupancy.

Typically, a majority of these issues are discovered and addressed during the commissioning phase of construction, but, unsurprisingly, we learned that this system was never commissioned upon installation. Some of the most critical issues observed with the systems include:

Based on our findings, it was clear that the recommendations needed to comprehensively target the distribution and controls for the system. In order to resolve these issues, we recommended these measures:

Implementing these recommendations is expected to resolve the existing issues with the operation and overall efficiency of the system. Based on our energy modeling, the measures listed above will reduce the building’s energy usage overall by over 35% per year. This would place the building in the top 25% for buildings in its category in the City. Paired with other measures recommended as part of the study, the building’s overall energy usage could be reduced by half and have an expected simple payback of less than 5 years.

This project illustrates the potential benefits a qualified retro-commissioning agent can provide. Through retro-commissioning studies, property owners not only comply with City law, but also create energy-saving projects that have long-lasting impacts on the efficiency, operation, and maintenance of their buildings’ systems. In many cases, the savings generated from finding and fixing critical issues and their root causes have been significantly greater than the cost of performing the audit and retro-commissioning study.

Do you have similar systems in your building and have concerns about their efficiency? Is your building performing similarly? Contact us and we’ll find the root cause of your issue!